When You Need to Crash, or Permission to S-t-o-p!

At age five, I was given an adult-size Italian grip fencing foil and was drilled over and over again in four basic moves whose repetition is engraved in my memory: "en garde; disengage; thrust; lunge". I was even scrawnier then than I am now, and the foil got very heavy very fast, but I was not allowed to just stop. I had to tap the tip of the foil three times on the ground in a made-up ritual to signal that I was tired and wanted to stop, and maybe, maybe my dad would let me rest.

My dad had a thing about broadly educating his daughters - my sister and me. And, to be fair, he was mostly a very enthusiastic teacher, exposing us to brain slides under his microscope, regular visits to the Natural History Museum and Planetarium, learning to skin dive, and of course, fencing.

Fast forward to my senior year in college, when I'd been dealing with Crohn's disease since age 18. I'd deferred graduation to take a bunch of science courses so that I could become a physical therapist because, according to my dad, that was what the up-and-coming profession was going to be. (Ok, he was right.) But I got sick. My joints swelled up, I lost weight, and just getting from one class to another because exhausting. When I showed up in the library one Friday afternoon for my work-study, I was feverish, panting (anemic) and my joints were red and hot, Knees and elbows large as grapefruits; my boss took one look at me and begged me to go home, tell my Dad I was done, and just take my degree in English Lit as planned. That weekend, with great dread, I made the announcement. I had to thrust my hot, swollen elbow under his nose to convince him that I was sick, and still, my father yelled at me that I was failing.

When stopping in reasonable time isn't an option, the only alternative is to crash. It's not just my dad who suffered from a terror of letting go and yielding. Our culture embodies a drive towards endless growth and productivity. We measure ourselves relentlessly by our work, and are collectively terrified of not measuring up. And we talk of illness in the language of war and battles. In this kind of environment, any retreat is seen as failure. Is it any wonder we are so ill, addicted, exhausted, and injured? 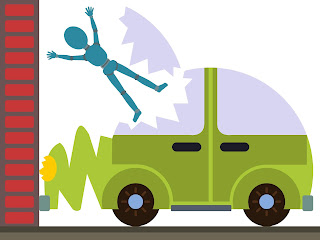 This summer, after recovering from a fire which consumed the building where my Pilates studio was, I felt exhausted and down-hearted. I was tired of picking up the pieces and going forward. I'd done it a few years before when I was diagnosed with breast cancer. I'd worked all through chemo and rushed to pick up the reins after surgery. God forbid I stop. Same with the fire. Within a month I was up and running again, my insurance adjustor remarking how "proactive" I was. But deep down, I longed to tap three times and be given permission to stop.

And then, July 2, I blew a disc in my studio, while preparing for the day. Next thing I knew I was on the floor writhing in pain, sobbing. And still, I worked for the next four hours. When you're used to pushing through pain, the word "stop" takes more than a few beats to get through. It's like having bad brakes. You need a longer distance until the car finally stops. It may, on the face of it, seem heroic, this impulse to keep going. It's not. It's a bad habit, and limiting. Possibly, it speaks of a lack of imagination, as if stopping were inconceivable. My God! What would you do if you had to stop? 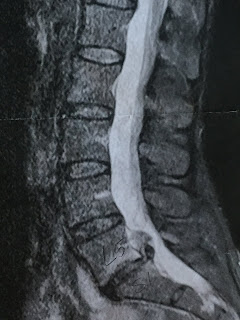 L5-S1 Disc extrusion: see blob that sticks out in the white space? That's the nerve the disc is pressing on. OUCH!!!

The sad part is wondering how many of us feel that only drastic pain justifies stopping. Sadder still, economic necessity may drive us past endurance. That has certainly been one of the drivers in my life. The fear of being homeless, extreme as that may seem, is not completely irrational.

In the depth of my heart, some part of me longed for something that would enable me to stop. The fire didn't do it. Sometimes I can't help wondering if the Law of Attraction, working to match my vibration of longing to stop with what would actually enable me to stop, resulted in this: a mechanical failure of my back - 'cuz cancer didn't do it, by the way.

In the meditation tradition I've been working in, all circumstances are brought onto the path. One is invited to see events as a mirror, as instruction or guidance. Whatever we call "God" is present in each and every being, thing, place, or event; God is showing up as This: in my case, a busted disc and the necessity of a surgical repair.

An upshot of having to stop is an opportunity to pause, look around, and simply take stock. Time flows differently. The task at hand becomes simple: do nothing so you can heal. (Of course, healing is something, but it's something your body does best without a lot of active interference from you. In fact, the less you do, the more you allow, the better. Or so I've found.) Another aspect of stopping is allowing people to take care of you. As difficult as it may be to admit, our lives are often bookended by being the receivers of great care. What if, along the way, we remembered how sweet it is to receive? How humbling it is to find even simple tasks difficult if not impossible. It's good to remember that our vulnerability is one deft blow away.

Posted by thespaciousbody at 5:26 PM